Guide to historical sites and attractions and timeline of Hilton Head Island history.

Hilton Head Island is named for the English sea captain William Hilton who was hired by a syndicate of Barbadian planters and claimed the island for England. Hilton "discovered" the island in 1663 but European colonization did not occur until around 1800. Before the Civil War, the plantations on Hilton Head Island prospered growing rice, indigo, and cotton.

The Hilton Head Island as we know it today began as an extraordinary vision of one man, Charles Fraser. His dream was to create a unique vacation resort where environmental concerns were intertwined with its development. Charles was a bold visionary who fought popular opinion in the 50's to create Sea Pines, a hugely successful and environmentally sensitive resort development. View our comprehensive timeline of historical events as well as our directory of historical sites and attractions on Hilton Head.
View map of Hilton Head Historical Sites »

Near the end of Beach City Road is the 5+ acre site containing Fort Howell, an excellent example of a Civil War era earthworks fort. Built in 1864 by the Union's 32nd Colored Infantry, it was to protect the freedmen's village of Mitchelville and to improve the defenses of Hilton Head.

In 1861, Hilton Head was captured by the Union Navy and became their headquarters in the South. Former slaves from Hilton Head and the surrounding plantations made their way to the encampment where many found employment. In 1862, Mitchelville was established near current Beach City Road and was the nation's first Freedmen's village, self-governing and with mandatory education requirements for the children.

The Fort is pentagonal in shape, surrounded by a dry moat, earthen walls 23 feet in height, and placement for 27 guns. Partially eroded and forgotten, it was rediscovered when neighboring Palmetto Hall was being developed and was donated to the Land Trust for preservation.

The Land Trust maintains the property in a natural state with adjacent areas for parking and with several interpretive signs. In 2011 it was listed as a National Historic site and the appropriate signage was erected. The upkeep and improvement of the site is an ongoing project of the Land Trust. It is open to the public during daylight hours. The Coastal Discovery Museum offers guided tours of the Fort on the 2nd and 4th Fridays of the month beginning at 9:30 called Uncovering the Roots of Reconstruction.

Many new visitors, who instantly note Hilton Head Island's small size and acres of pretty vacation homes and resorts, are surprised to learn that the island was once home to 4 military forts during the height of the Civil War. Sadly, while the remnants of the forts are, for the most part, long gone, visitors can still enjoy a glimpse of this history, and enjoy a leisurely cool and breezy nature walk to boot, with a stroll through Fort Mitchel.

Once on site, visitors can simply follow the small historical markers to the entrance of Fort Mitchel. A short paved pathway runs through the site, and extends both parallel to and along the earthen works that are, in fact, the fort's remains. Small walls are overgrown with wildly growing plants, but the trek is nonetheless an easy one, thanks mainly to the paved pathway. Scattered signs note points of interest throughout the site, and there are several era-appropriate cannons stationed in Fort Mitchel as well.

Ruins of a 1793 Civil War plantation home and slave quarters with rumored ghost sightings. A mansion on Braddock Point Plantation (in the area now known as Sea Pines) was owned and occupied in the antebellum era by two families, the Stoneys and the Baynards. The tabby home was built by the former and subsequently purchased and later deserted by the latter, so that it is now called the Stoney-Baynard Ruins. The ruins are located off of Plantation Drive.

Learning center with programs and walks on 68 coastal acres with ancient buildings, trees and wildlife. The Coastal Discovery Museum is one of the most memorable destinations on Hilton Head Island. Explore natural history and cultural heritage on the 68 acre Honey Horn property. The Museum's trails, gardens, live oaks, butterfly enclosure, and horses are just a few of the fun experiences you will encounter during your visit. Mon. - Sat. 9-4:30 and Sun. 11-3.

The Gullah Museum of Hilton Head Island is a 501(C)(3) non-profit organization that was established in 2003 to preserve Gullah history, culture, customs, traditions, language, stories, songs and structures on Hilton Head Island.

Gullah Heritage Trail Tours was founded in 1996 by a Hilton Head Island Gullah Family Partnership. This outstanding family has been involved in preserving Gullah cultural heritage, blending Gullah cultural values, in the SC-GA Low Country, for more than 40 years. Based on Hilton Head Island, Gullah Heritage Trail Tours caters to Low Country visitors interested in learning about the history of Gullah Culture.

Just under five decades old, the red-and-white-striped Harbour Town Lighthouse serves not only as a beacon to the many ships that reside in our Yacht Basin but also as a landmark that has come to symbolize Hilton Head Island to people all over the world. With the addition of the Lighthouse Legends Tour in 2001, we were able to transform this icon into an informative, educational, and fun experience for all. In addition to the historical lighthouse tour, we proudly offer one of the most unique gift shops on Hilton Head Island, featuring one the largest collections about lighthouses in America.

In 1984 the Bishop of Charleston announced that a second parish would be formed at the northern end of Hilton Head Island. With a mixture of parishioners gathered from Holy Family Parish on the island's south end and rapidly arriving newcomers from the Midwest, Mid-Atlantic and the Northeast, the Spirit-infused adventure began.

Welcome to Historic Bluffton! Begin your visit here at The Heyward House, official Welcome Center for the town of Bluffton. Tour our House Museum, built by slaves in 1841; find maps and brochures for area businesses, and get a taste of the culture and history of our fair town. The Heyward House Museum and Welcome Center is owned and operated by the Bluffton Historical Preservation Society, a non-profit, 501-(C)-3 corporation, dedicated to the preservation of the culture and history of Bluffton.

This is the site of the first church on Hilton Head Island which was completed in 1788. This location was the center of activity on the island in the late 18th and early 19th centuries, as the church was in close proximity to a Militia muster house and a Masonic lodge. It is also home to the oldest existing structure on the island, the Baynard Mausoleum, which was built in 1846 by William Baynard, a wealthy Plantation owner. The cemetery contains the graves and memorials for four Revolutionary War Patriots: Isaac Baldwin, James Davant, John Stoney, and Charles Davant. Charles Davant was ambushed by a Tory militia unit, was mortally wounded, and is the only known Patriot casualty on the island.
History of Hilton Head Island

The following information was provided by the Coastal Discovery Museum. The Museum gathered the information for the timeline from Town residents and long-time Islanders. The Museum relied on significant input from the Community to put together the timeline. A book entilted "Images of America Hilton Head Island" covers the island's history and is available for sale at the museum at 843.689.6767.

Native Indians resided on Hilton Head Island as early as 4000 BC. Evidence of early settlement remains today in the form of a 3400 year old "Indian Shell ring" in Sea Pines Forest Preserve.

During the Civil War, Hilton Head Island was captured and occupied by the Union forces. Overtaken by a massive amphibious landing (the size of which was not attempted again until WWII), Hilton Head Island became a strategic outpost for the blockade of Confederate sea ports. 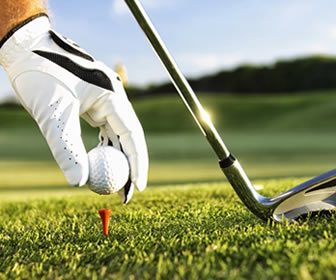 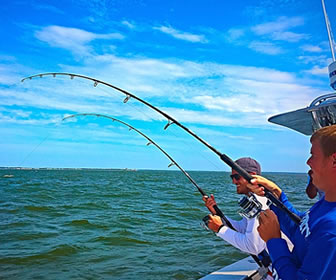 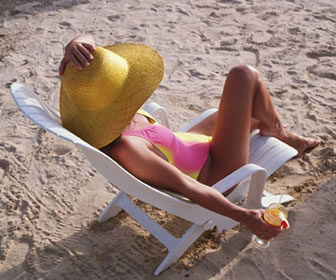 Hilton Head Island boasts 12 miles of expansive, hard-packed beaches which range up to 600 feet at low tide. The tide levels vary as much as 6-8 feet every 6 hours. All Hilton Head beaches are public, but some access points are private and vary by location. 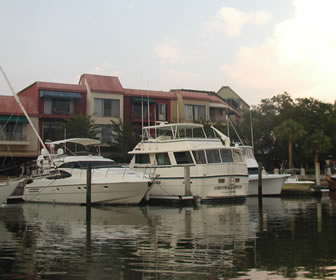 The Calibogue Sound and Harbor River feed into the Atlantic Ocean and provide easy access for yachts and marine vessels of all sizes.
View the marinas of Hilton Head »